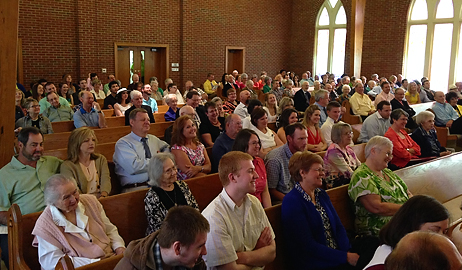 Aldersgate United Methodist Church is a growing and active church that welcomes all of God’s people. We are a multi-generational congregation focused on sharing the Good News.

Each week, Aldersgate offers blended worship, while remaining Bible-centered. We remain mission-focused at the heart, always looking for opportunities in our local community and throughout the world. We hope that you will be a part of these exciting times here at Aldersgate.

The people of The United Methodist Church are part of the second largest Protestant denomination in the United States. Our worldwide connection includes approximately 12.8 million members.

As United Methodists, we have an obligation to bear a faithful Christian witness to Jesus Christ, the living reality at the center of the Church’s life and witness. To fulfill this obligation, we reflect critically on our biblical and theological inheritance, striving to express faithfully the witness we make in our own time.

If you would like to find out more about the basic beliefs of the United Methodist Church, please click here.

In 1868, an acre of ground on Hays Avenue in the eastern part of Jackson, TN was purchased from the nieces and nephews of Andrew Jackson. A small frame building was built and the first service in this new church was held on February 21, 1869. This was the birth of what is today Aldersgate United Methodist Church.

The church has gone through several name changes but was called Hays Avenue United Methodist Church from 1890 until 1980. In that location, the congregation ministered to the spiritual needs of the people in that section of the city.

With the tremendous growth in the size of Jackson and population shifts in the 1960’s and 1970’s, the congregation began to move in different directions. The church was faced with the decision to move its location. In 1980, the move was made to a new facility at the corner of North Parkway and Campbell Street, and the name was changed to Aldersgate. This was a reminder of John Wesley’s “heart-warming” experience on Aldersgate Street in London in 1738, which was considered the beginning of Methodism.

Who We Are Pages