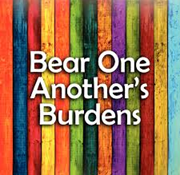 Albert Schweitzer was one of the most famous missionaries of the modern era. Leaving behind both an academic and medical career, he set up a medical clinic in French Equatorial Africa. He was 85 years old when Andrew Davison of Colgate Rochester Seminary had the privilege of visiting. Davison tells how one morning Schweitzer and some others were walking up a hill on an extremely hot day.  Dr. Schweitzer walked away from the group making his way toward an African woman struggling up the hill with a large load of wood for the cook fires. Schweitzer took the entire load of wood from the woman and carried it up the hill for her.  Everyone in the rest of the group was surprised and concerned that a person of Dr. Schweitzer’s age would strain himself so. Dr. Schweitzer looked at the group, then pointed to the woman and said, “No one should ever have to carry a burden like that alone.”

Paul tells us in Galatians 6:2, “Carry each other’s burdens, and in this way you will fulfill the law of Christ.”  The word “carry” means to remove or lift an overwhelming load.  A burden is like a huge boulder weighing someone down as they stagger along the highway of life.  This may represent any number of things: sickness, a sudden tragedy, personal loss, financial difficulty, broken dreams, a failed marriage, family problems, career setbacks, or the death of a loved one. Christians are supposed to be in the restoring business, the healing business, the putting-back-together business, and the bearing-burdens business! In order for the church to function as it was designed, each of us must be committed to care for one another.  More people have been brought into the church by the kindness of real Christian love than by all the theological arguments in the world, and more people have been driven from the church by the hardness and ugliness of so-called Christianity than by all the doubts in the world.  Let us be ready to help a brother or sister carrying a heavy load; it will not be so heavy if it is shared.

Have you ever heard about “The Nail”? As the story goes, they built a new church building and people came from far and wide to see it. They admired its beauty! Up on the roof, a little nail heard the people praising everything about the lovely structure-except the nail! No one even knew he was there, and he became angry and jealous. “If I am that insignificant, nobody will miss me if I quit!” So the nail then released its hold, slid down the roof, and fell in the mud.

That night it rained and rained. Soon, the shingle that had no nail blew away, and the roof began to leak. The water streaked the walls and the beautiful murals. The plaster began to fall, the carpet was stained, and the pulpit Bible was ruined by water. All this because a little nail decided to quit! But what of the nail? While holding the shingle, it was obscure but it was also useful. Buried in the mud it was just as obscure, but now it was useless and would soon be consumed by rust! The moral of the story – every member is important to the church!  You may, like the nail, feel obscure at times, but just like the nail, your absence is felt. When you are not present for worship, in some way the body of Christ hurts. We are ALL a part of the Lord’s ministry.

The following is a list of STRICT UNBENDING RULES for dealing with stray cats:

It’s a humorous progression which has a lot of truth in it when it comes to stray cats. More importantly it reminds us of what happens spiritually in regard to sin. We don’t want to sin, so we establish boundaries. “I’m not going to go here, look there, think about that.” But, before long, we’ve crossed the line. We think, “That’s all right. I still haven’t done anything wrong. I’ll just re-establish my boundaries and not be quite so strict.” And slowly but surely, sin works its way further and further into our lives until we find that we’re no longer in control of the situation. “But each one is tempted when he is drawn away by his own desires and enticed. Then, when desire has conceived, it gives birth to sin; and sin, when it is full-grown, brings forth death.” (James 1:14-15) Realize that stray cats and sin have a whole lot in common.

A candidate for political office asked a constituent what he thought of the speech he had just given on the agricultural program. “Not bad,” replied the voter, “but rain would have done a lot more good!” We all know people who “talk a good game” but don’t play. They’re all talk and no action—and sometimes “they” are us! We have the best of intentions, but… To be a disciple of Christ is to be committed to action. Unless we act on our faith, our faith withers and dies. Jesus said, “Come, follow me.” Where is God calling you to put your faith into action? It may be time to stop talking about what is needed and actually do what needs to be done. I want to challenge our church family to make some new and needed commitments in 2020.

Would you make a commitment to be part of the prayer ministry of this church? At bare minimum would you be willing to give 30 minutes of time one day out of a month to spend in the Prayer Room praying for the needs of our church, one another as the family of God, and for sick, hurting, lost, or struggling individuals who need to experience God’s grace. Would you make a commitment to help with ministry involving our children? Opportunities exist during children’s church time, Sunday school and additional helpers in the nursery Do you hear God’s call on your life to volunteer a little bit of your time and influence to work with some great children?

For the disciple of Jesus Christ, commitment means turning from serving self to serving others, for Jesus said the one who would be first must be the servant of all. John Maxwell—in his book “ Be a people person”—–states—“Until I am committed, there is a hesitancy, a chance to draw back. But the moment I definitely commit myself, then God moves also, and a whole steam of events erupt. All manner of unforeseen incidents, meetings, persons, and material assistance which I could never have dreamed would come my way begin to flow toward me—the moment I make a commitment.” Even a small commitment to put your faith into action is better than no commitment. Where do we need to start?

A common command among many a fresh military recruit might hear from the drill sergeant are the words: About face!” Like snapping to attention or giving a proper salute, doing an about face requires practice and precision. Otherwise, the pivot may throw one off-balance resulting in embarrassing, even painful consequences.

The spiritual equivalent to an “about face” is repentance. Repentance is a change of mind resulting in a change of life. While repentance is the result of “godly sorrow” (2 Cor. 7:10); sorrow alone is not repentance. While the Lord knows the thoughts and intentions of the heart; as human beings, we are incapable of accurately gauging what takes place in the heart of those making a claim to repentance. The best we can do is observe, in the conduct of others, the evidence or lack of evidence of genuine repentance. A spiritual “about face” sends one in the opposite direction. Before repentance one had turned away from the Lord; but, now, with true repentance, one has set his or her face toward God.

Too many practice insincere repentance. They feel uncomfortable, even sorrowful, about their sins. Some may even show their repentance by a public confession. In many cases, this is a good start. But, repentance involves so much more than that. One must also follow-through, making an “about face” and moving forward in the direction that God has revealed in His word.  This is where the church must show ongoing support through the hard work of making these difficult changes in life.

Repentance is God’s most difficult command. We must not compromise where God has spoken. We do no one a favor by watering down God’s expectations. Diverting people away from genuine repentance because it is difficult or uncomfortable keeps them away from the blessings of forgiveness and everlasting life. Jesus said, “unless you repent, you will all likewise perish” (Lk. 13:3). But, the Lord “is patient toward you, not wishing for any to perish but for all to come to repentance” (2 Pet. 3:9). The kindness of God should lead “us to repentance” (Rm. 2:4). But, ultimately, we are the ones who must do an “about face.”