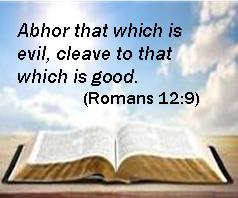 The story is told of a county superintendent of education who had three applications to fill one vacancy among bus drivers. He devised a scenario for selecting the proper man for the job. The superintendent took the first applicant to a sharp curve on a steep grade along the road and asked, “How close can you drive the school bus to the edge of the road on the curve without going over the cliff with the children?” The interested driver replied, “I believe I can go within two inches and still be safe.”

The second person who had applied for the job heard the same proposition. He checked the curve and told the county official, “I believe I can drive within one inch of the edge and not go over.” When the superintendent took the third driver to the same highway and made a similar proposition to him, the applicant immediately asked, “Do you think I’m crazy? I’m not interested in seeing how close I can get to the edge with the bus. I’ll be trying to see how far I can keep away from the danger line with the bus!” He received the job.

There is a borderline between the church and the world for the Christian. The church means “the called out from the kingdom of sin.” John said, “Love not the world, neither the things that are in the world. If any man love the world, the love of the Father is not in Him. ” (I John 2:15). One who seeks to stay just as near the world of sin as possible and still follow Christ has the wrong attitude. Our individual, as the driver, should stay as far away from the danger zone as possible. Paul wrote, “Abhor that which is evil, cleave to that which is good ” (Romans 12:9).